Battle For Ozzz Undead In The Dark Forest Concluded

Below: Wizard Zororaster uses his magic to bolster the militia (although he makes sure a thick tree keeps him sheltered from enemy fire). 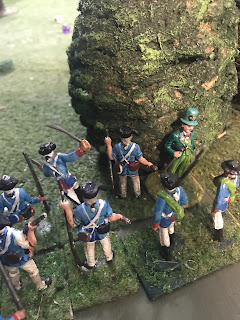 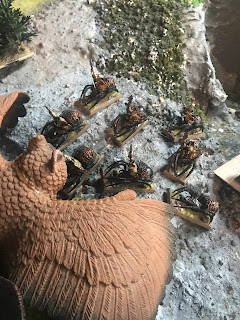 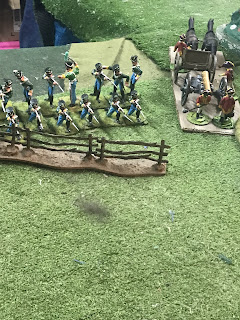 A view of the Evil side's left flank 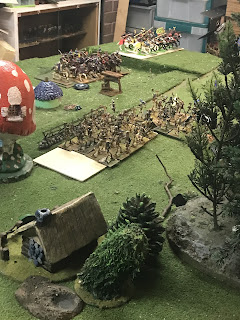 The Munchkin right flank. The cannons and guard here never fired a shot. 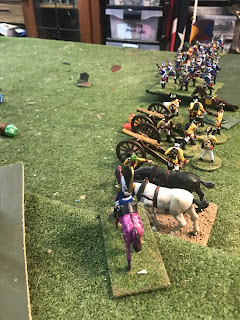 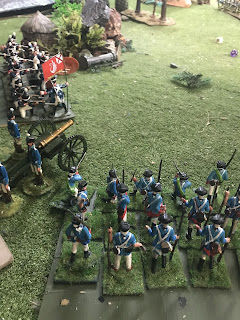 PROGRESS OF THE BATTLE

The Evil side's skeleton warriors bore the brunt of its advance, Eventually the skeletons were destroyed in the central forest. However, the plate armored Winkies followed up their advance and wiped out the scarecrows and tin men. The 'Cowardly Lion' lay dead. In a last desperate move the Munchkin cavalry charged the halberd armed Winkies as they emerged from the forest. They inflicted three casualties before they were destroyed.

The Wizard had decided that discretion was the better part of valor and even Glinda, the Good Witch, had taken shelter behind a rock.

On my right flank my lions and giant turned to threaten the advancing Quadling infantry. The latter had destroyed the summoned skeleton warriors but were now exposed to rifle fire and the fire bursts of both my witches. they were destroyed.

Mat still had a unit of uncommitted Quadling cavalry his Munchkin guard and two artillery pieces. These had not yet fired a shot in anger. They had kept my forces out of that corner of the field but the threat from my cavalry had also kept them uninvolved in the battle.

We decided to call it a day at move ten. I had possession of two table quarters and the two others were in dispute. My plate armored Winkies were about to reach Mat's table edge and turn to threaten his remaining forces.

The Britains Detail figures are usually part of our Fezian armies but they worked well as the Winkie troops. They were better armored than the ones in the Oz stories but, like them, lacked firearms. The exceptions were the Winkie rifle men and the diminutive Gillikin musket men. 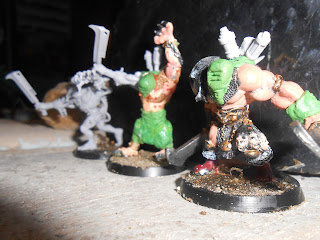